The synagogue in Lucenec is the biggest synagogue in Slovakia. It was built by the Jewish community in 1924-25 at a place where an older synagogue used to stay. It climbs to the height of 34.5 meters and its architecture has been inspired by oriental-Byzantine morphology and ornamentation. What once served as religious ceremonies of the Jewish Church is now an ecumenical place hosting social and cultural events, opening its doors to wide public. 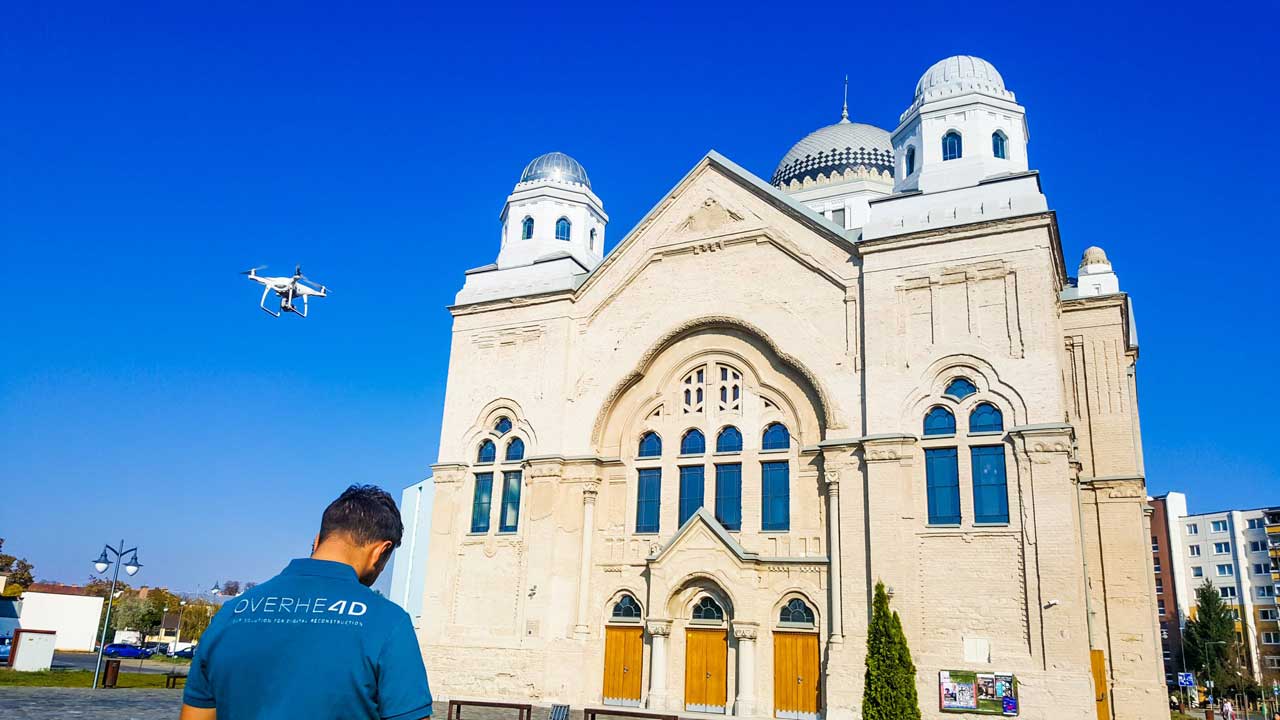 This is also a reason why the city of Lucenec has decided to digitize the synagogue. Its visitors can now view parts of it that they otherwise would have never been able to see and learn some interesting facts about the synagogue. Moreover, another, rather an honourable, reason for digitizing the synagogue has been making it accessible also to people with a physical disability. Certain parts of the synagogue are either closed to the public or accessible only on foot. Hence, this gives the visitors a unique opportunity to explore it from every corner and angle.

A Slovak company Overhead has been tasked with a creation of a lifelike digital replica of the synagogue in order to create an interactive virtual guide. The aim of the guide is to enrich the visit itself, to offer visitors a different perspective. People can view the 3D model directly in the synagogue on a touch screen which serves as an info panel.

Photogrammetry serves as a fast and accurate method of transferring the real world into virtual one. That is why it is nowadays a go-to tool for wide range of industries, when it comes to creating lifelike 3D models. Since the aim of this project was to create a representation of the synagogue in the highest possible fidelity, the company decided to rely on RealityCapture.

The exterior of the synagogue has been created from almost 4,000 photos, captured with the DJI Phantom 4 Pro drone and the Sony A7R II camera. 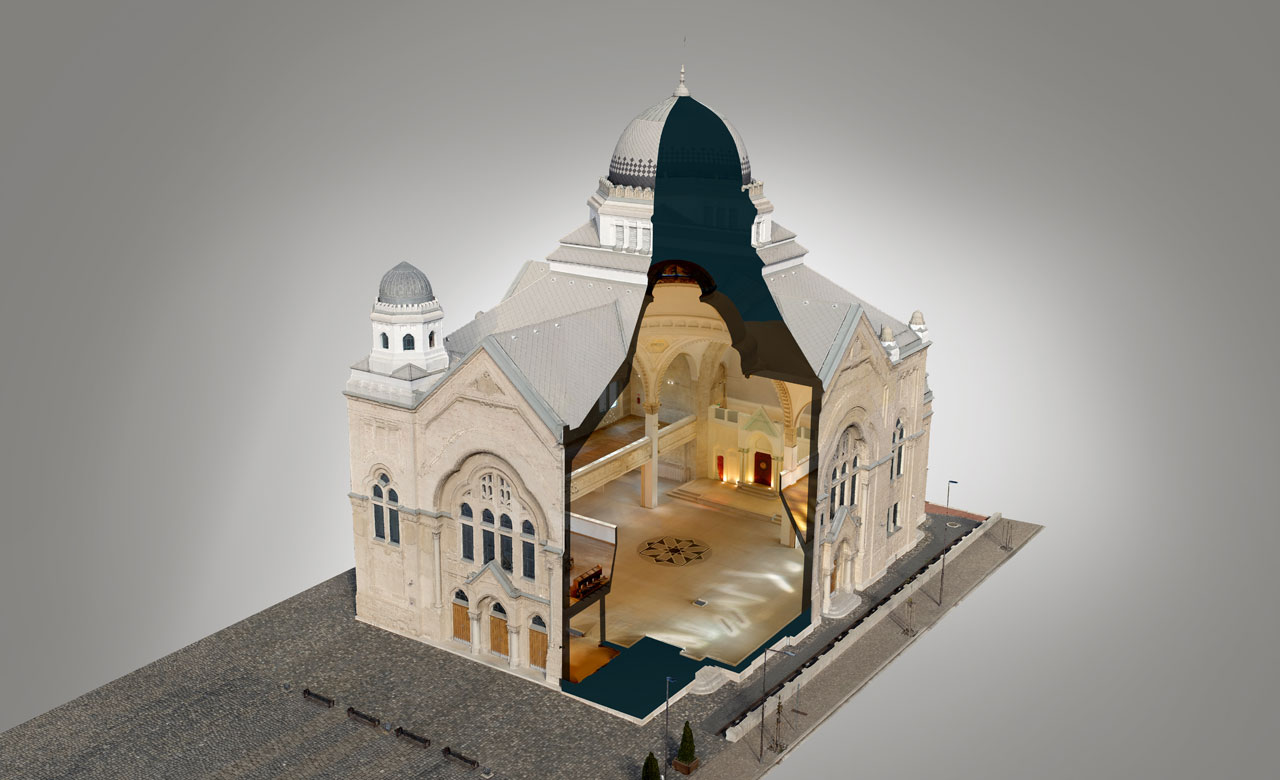 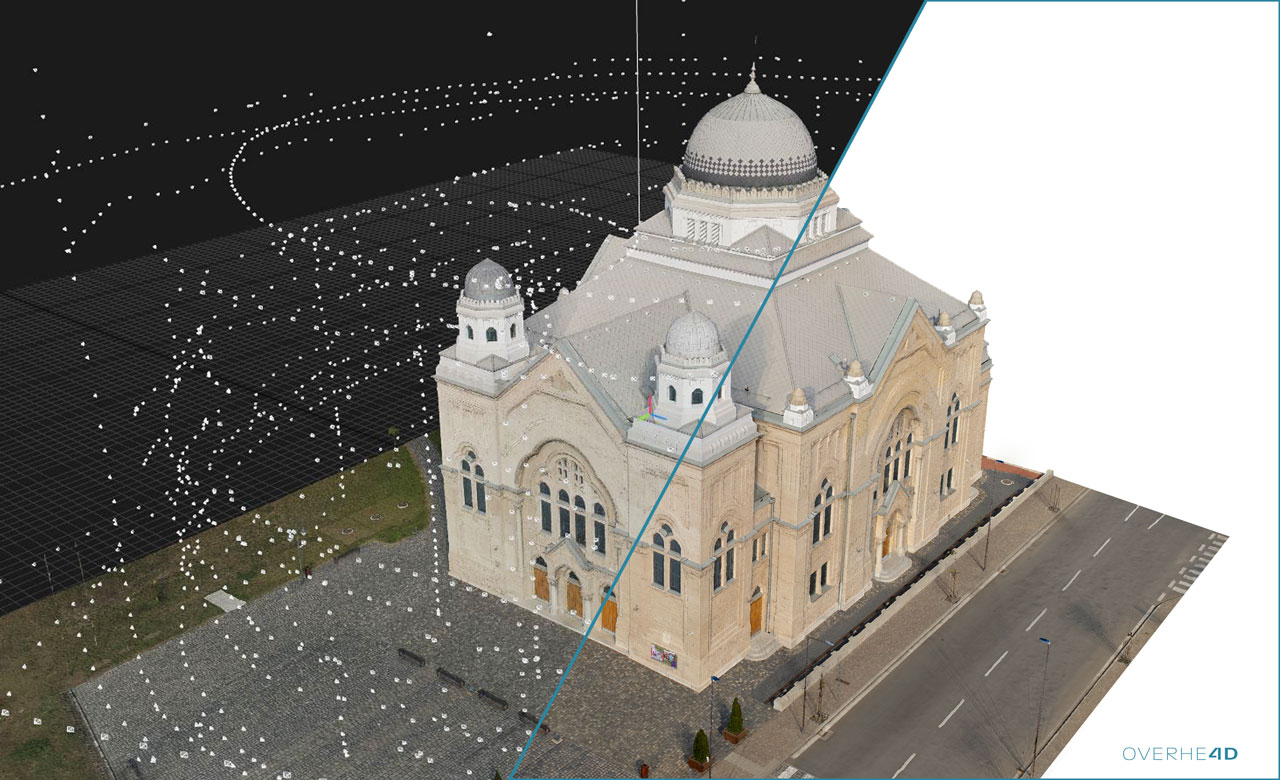 For the interior, they have also employed the Faro Focus X330 laser scanner to secure that every important part of the synagogue was captured. Further, it helped them gather the data faster as, for the purposes of data capturing, the synagogue was temporarily closed and they had only two days to capture all the details. Due to the height of the synagogue, they also flew the drone indoors. 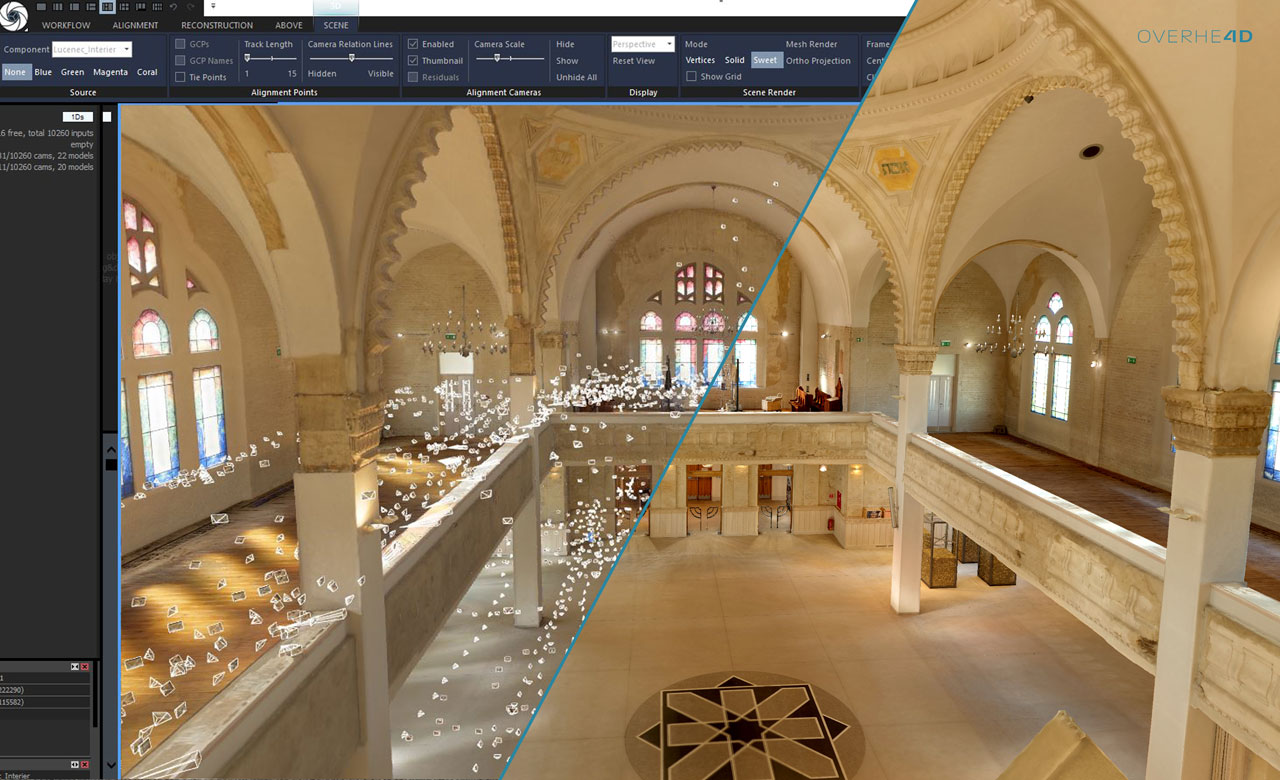 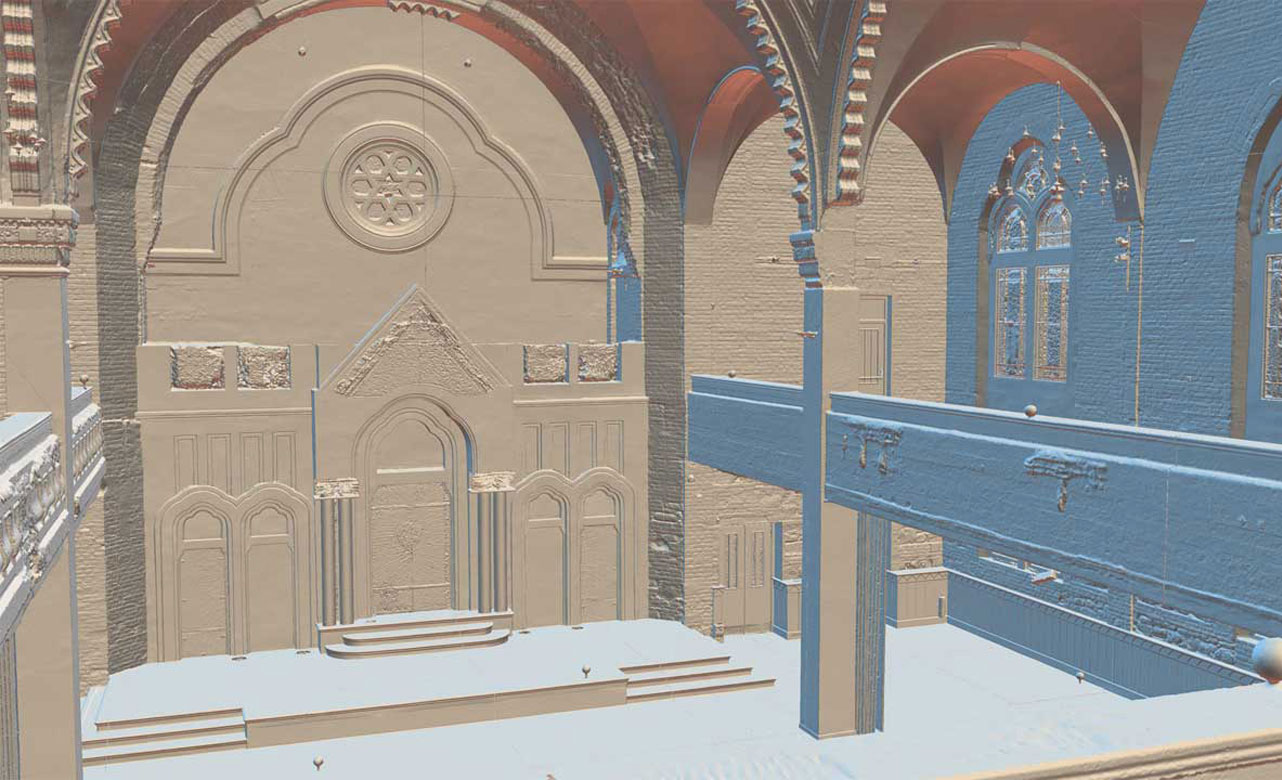 When capturing the data outdoors, there are not always the perfect weather conditions, therefore pre-processing of captured photos is sometimes necessary. In this case, the delighting of images was done.

processing of captured photos is sometimes necessary. In this case, the delighting of images was done. Then the processing was done in two steps. First, the laser scans were aligned and images were added afterwards. 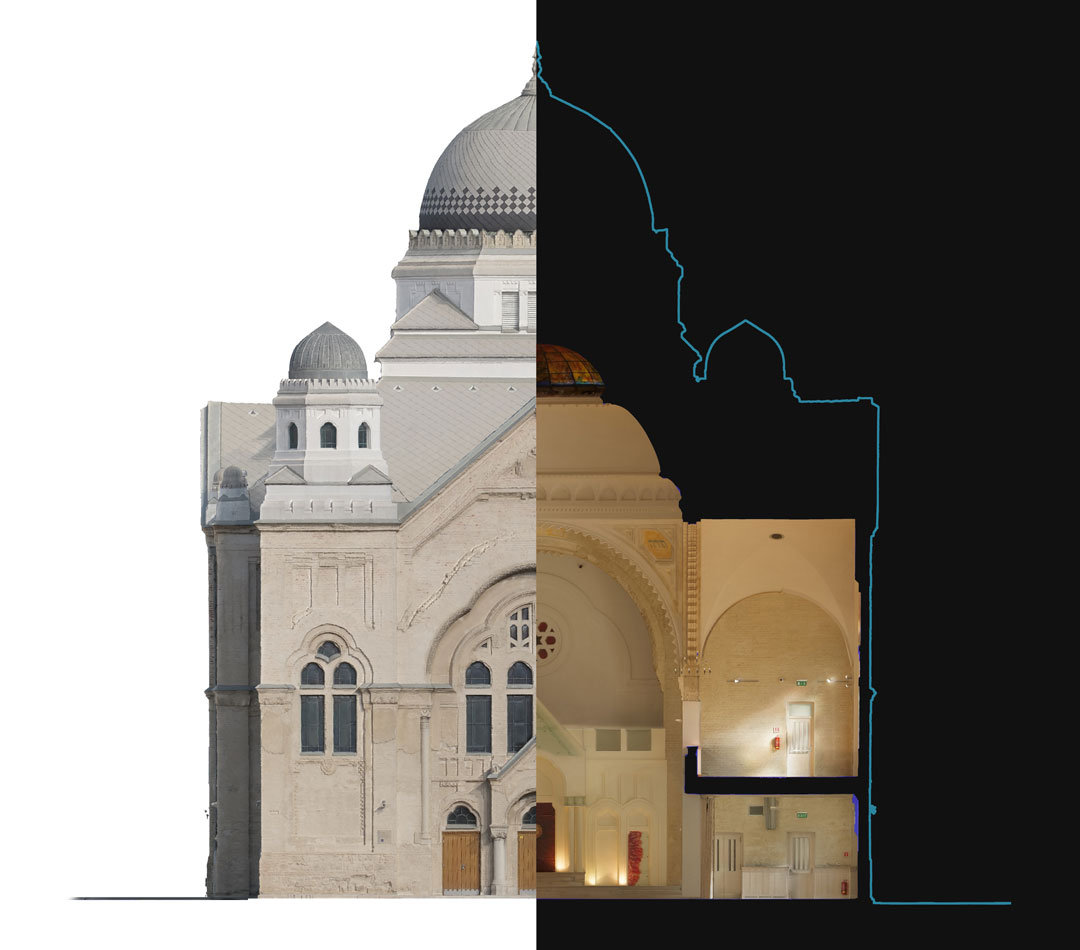 The generated mesh was divided into parts and each part was decimated to the maximum of 30 million polygons, because this is the amount that also an external piece of software is able to work with. For the reconstruction of small details, such as chandeliers, glass cabinets, and windows, they have done manual retopology.

In order to ensure the detailed textures but simultaneously allow viewing of the model also on mobile devices, they have used the Texture Reprojection tool implemented within RealityCapture. This allowed them to project the high resolution texture to a low poly model. Finally, from the resulting 3D model ortho maps were generated and used for creation of 2D technical drawings. The final model optimised for online use contains 7 million triangles and 11x 8k textures.

The resulting visual guide of synagogue serves as a great example of how the use of modern technologies offers us another opportunity for presentation of cultural heritage sites and objects, and bringing them closer to people. Furthermore, it lends the synagogue a touch of uniqueness as the whole guide experience can be tried only within its walls. 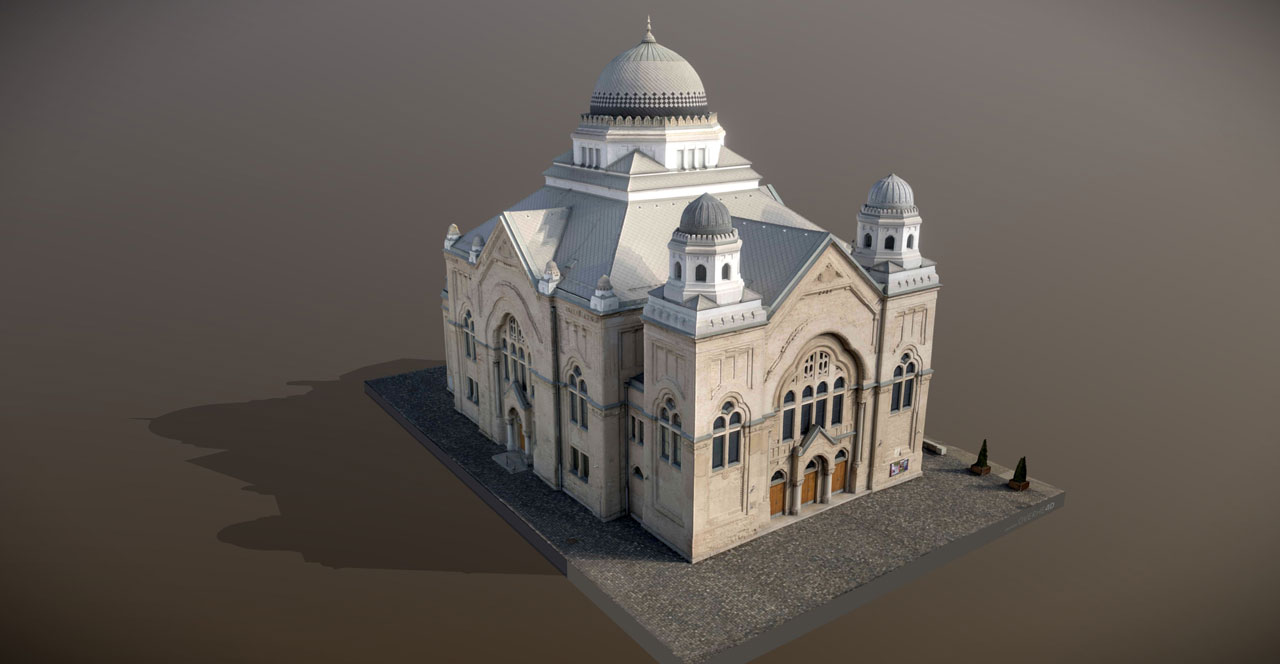 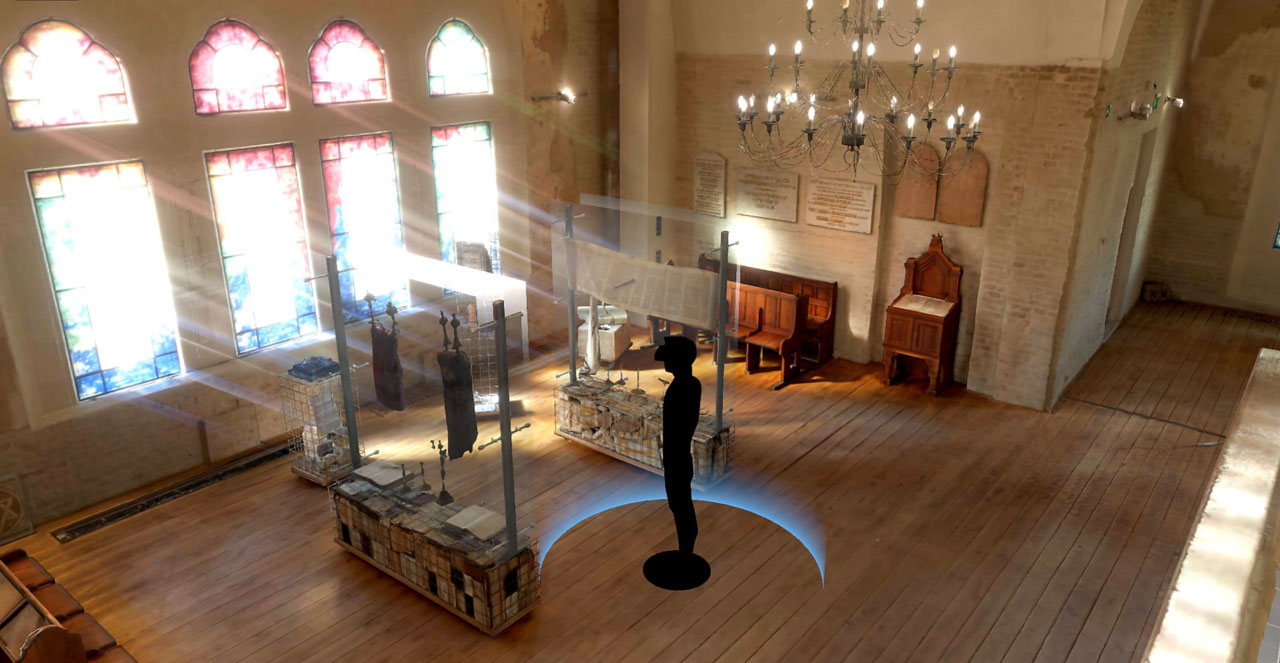 
Technical specification of the project