British company Reality in Virtual Reality (RiVR) is taking Virtual Reality to next level by creating room scale VR training environments that is used for blue light services. Their latest project is focused on training of fire investigators and it is gaining lot of attention.

By using cutting edge technology, they are producing photo realistic training scenarios. The Advantage of VR being used as a method of training is that it makes training far more effective than traditional methods and also a lot safer.

“In VR, your brain is much more receptive to what is happening around you and interactions are more realistic. This improves how you learn. VR is scalable, so in addition to being an incredibly powerful training tool, it provides significant costs savings, crucial when budgets are under pressure.” Alex Harvey, creative director at RiVR.


The whole idea occurred over a year ago when they met with Paul Speight from Leicestershire Fire and Rescue at the Emergency Service show 2016 in the UK, who was showcasing his VR 360 road safety films. They showed him some prototype photorealistic environments which they created using Reality Capture showing the realism possible with our environments and how they could be used by the Fire Service to train their fire fighters in Fire Investigation field and beyond. A Year has passed and they have a number of demos which they were showcasing at this years Emergency Services Show at the NEC in the UK on the 20th and 21st of September.

Except their close co-operation with Fire Services in the UK, they are also working with the police/home office (CAST) and the military in the UK to create suitable VR training programs for them. Furthermore, they have already started discussion with major car manufacturers for machinery training as well as with well-known charities for their first aid trainings. 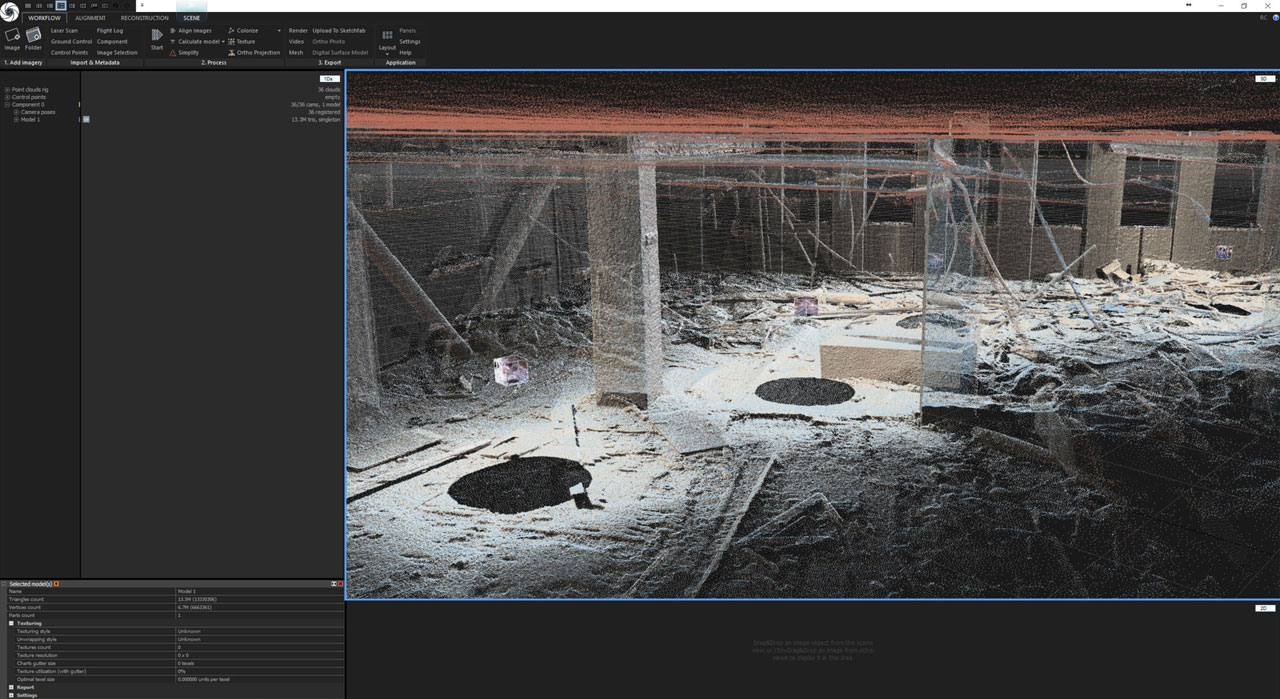 Creation of the whole environment consisted of several research trips, hence, the final environment consists of thousands of photos. The building that is used for the training is a real place which they visited with Leicester Fire and Rescue team. During the one-day visit, they captured interior, exterior, from ground and air and took approximately 1150 photos. The rest of the objects, such as fire truck, rescue equipment, interactive object and the casualty where then merged into the environment in post production.

The reconstruction of the scene has been done in Normal detail settings within Reality Capture. Once the object file and textures were done, 3D modelling software was used to optimize the mesh. Then the environment is imported to the software engine where the navigation points, interactive objects and an audio soundscape are added in order to create a truly immersive VR experience. The main environment took a few hours to process in RealityCapture, refining and optimizing the environment to work within a virtual environment using HTC Vive, took much longer 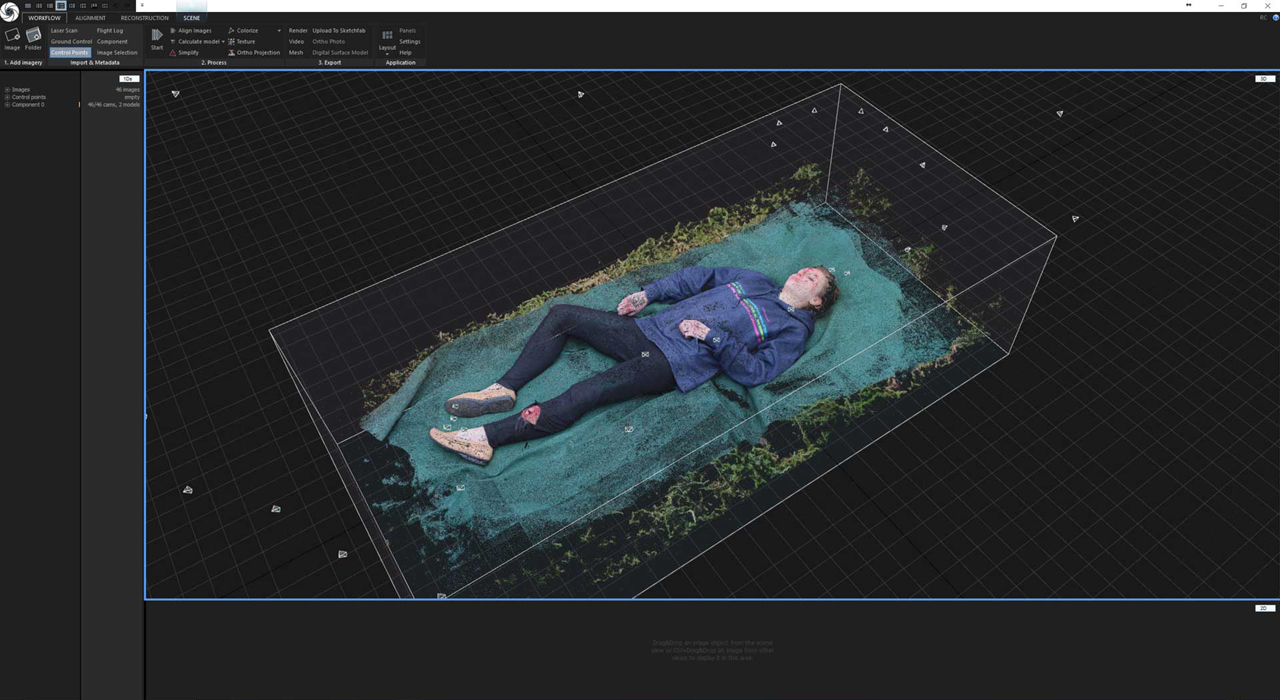 “We love Reality Capture, it has given us the ability to bring the environments that we capture to VR in hours rather than weeks. The team come from a video game background where we require large teams to create realistic 3D environments. Reality Capture not only allows us to have an environment quicker, but it's so easy to use and requires just one person, rather than an entire team. The results are also of high quality and detail and it’s also photorealistic without that artificial look of a created asset.” Alex Harvey (RiVR)

What gives the scene the real-life feeling is that each item in the room can be picked up, moved and investigated as would be in real world. Each item is in exact position as it was in original building, While the trainee is performing the investigation, he or she is being assessed by qualified trainer. By using VR for training, the trainee can safely investigate the environment without need to actually access the hazardous area. Further, as each scene can be restarted it allows the user to make mistakes, without any risk. 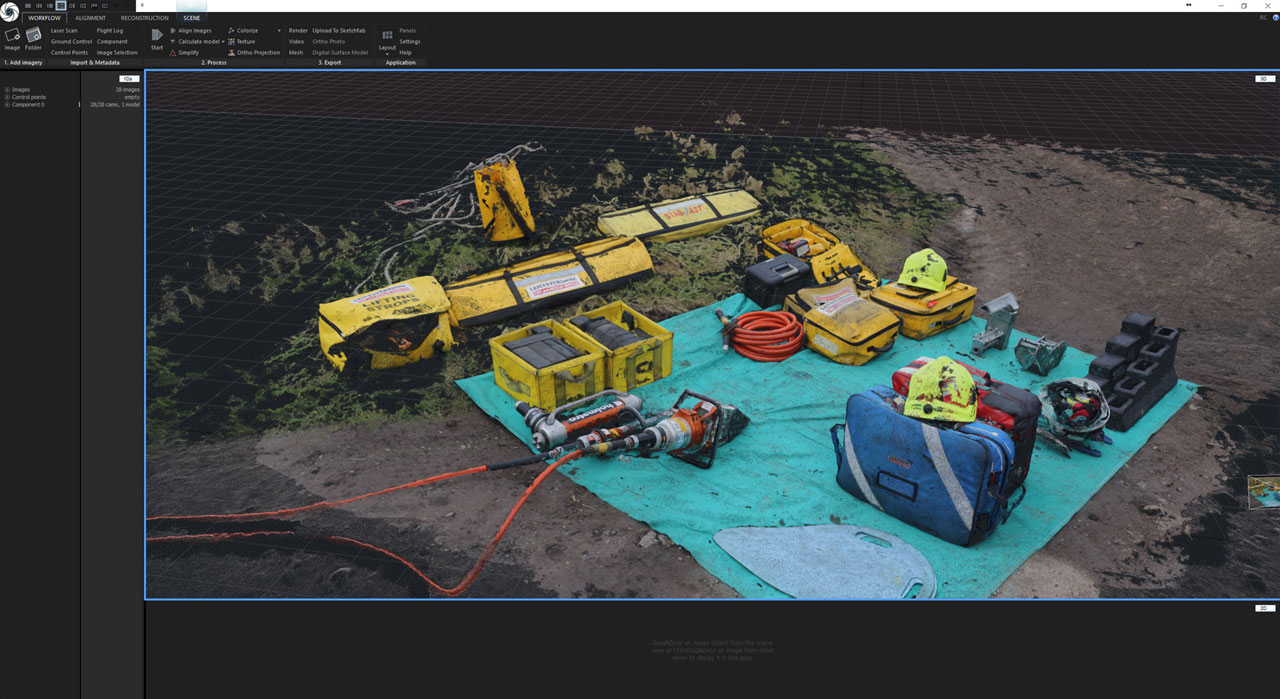 Recently, they have been also partnering with a Dutch company Manus VR, who provided them with Manus VR gloves which make it possible to pick up physical objects in virtual world. A Vive tracker is attached to the wrist which allows you to track where the glove is in space. Being able to pick up real world objects helps muscle memory because you feel the real weight of the object in your hands.

“Our main goal is for RiVR to revolutionize training for the emergency services, allowing them to train in real life locations within virtual reality but safer and cheaper than traditional training techniques. We really believe in VR and feel that it's the future for training for all industries as the benefits and immersive nature of photorealistic training and the reduction in costs and the high accessibility, gives VR training huge advantages over traditional training.” Ben Hermer CTO

Reality in Virtual Reality (www.rivr.uk) is UK company, which is a leading developer of photorealistic virtual reality experiences. Their multi-discipline team is comprised of leaders from various sectors such as training professionals, AAA game developers, ex-police staff, camera experts, and VR technologists.