Guildford Castle VR is an entertaining and educational historical experience which enables the user to virtually travel through space and time to explore one of England’s earliest castles. 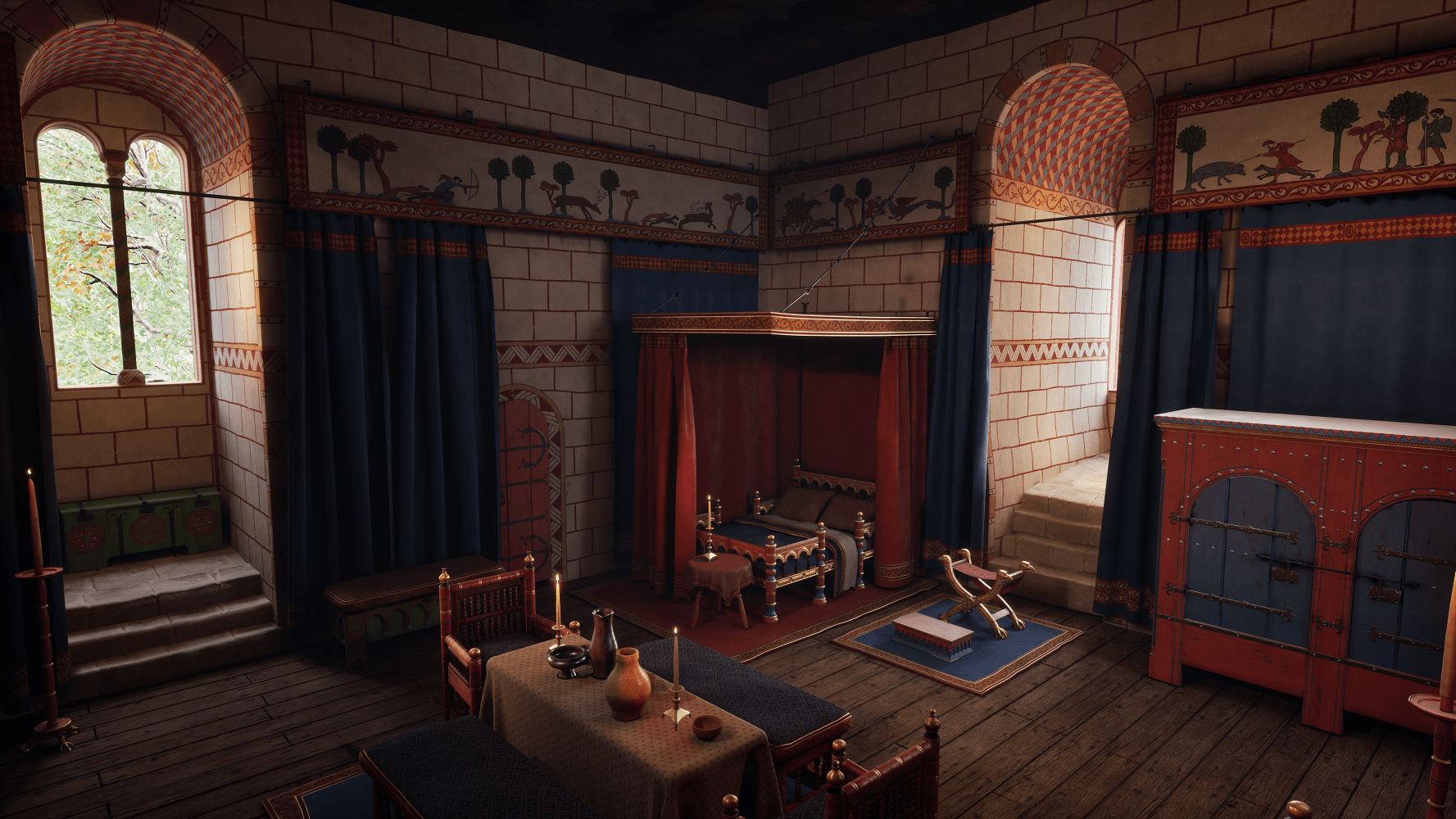 How did you get the idea to create this VR project?

The idea for the project came from experiencing many VR cultural titles and realising the vast potential of this new medium to experience history and culture in an entirely new and immersive way. Whilst we found many excellent experiences, we were always left feeling that we wanted more, both in the level of immersion and the richness of the historical information. Our sole focus was to create a more comprehensive and engaging experience than before, combining a high level of virtual environment realism, meticulously researched historical reconstructions and a rich audio-visual narrative. We set ourselves the task of creating a virtual experience which would rival – and in some respects exceed – a real life visit to the site.

Our first focus was on capturing and recreating the modern-day environment.

We used a Faro Focus S350 LiDAR scanner to scan the overall site and then processed a model in RealityCapture, providing us with an instant “white box” of millimetre accuracy. Throughout the creation of the modern-day environment, this served as an exact placement and shape reference for all assets: large structures, props and even the foliage. 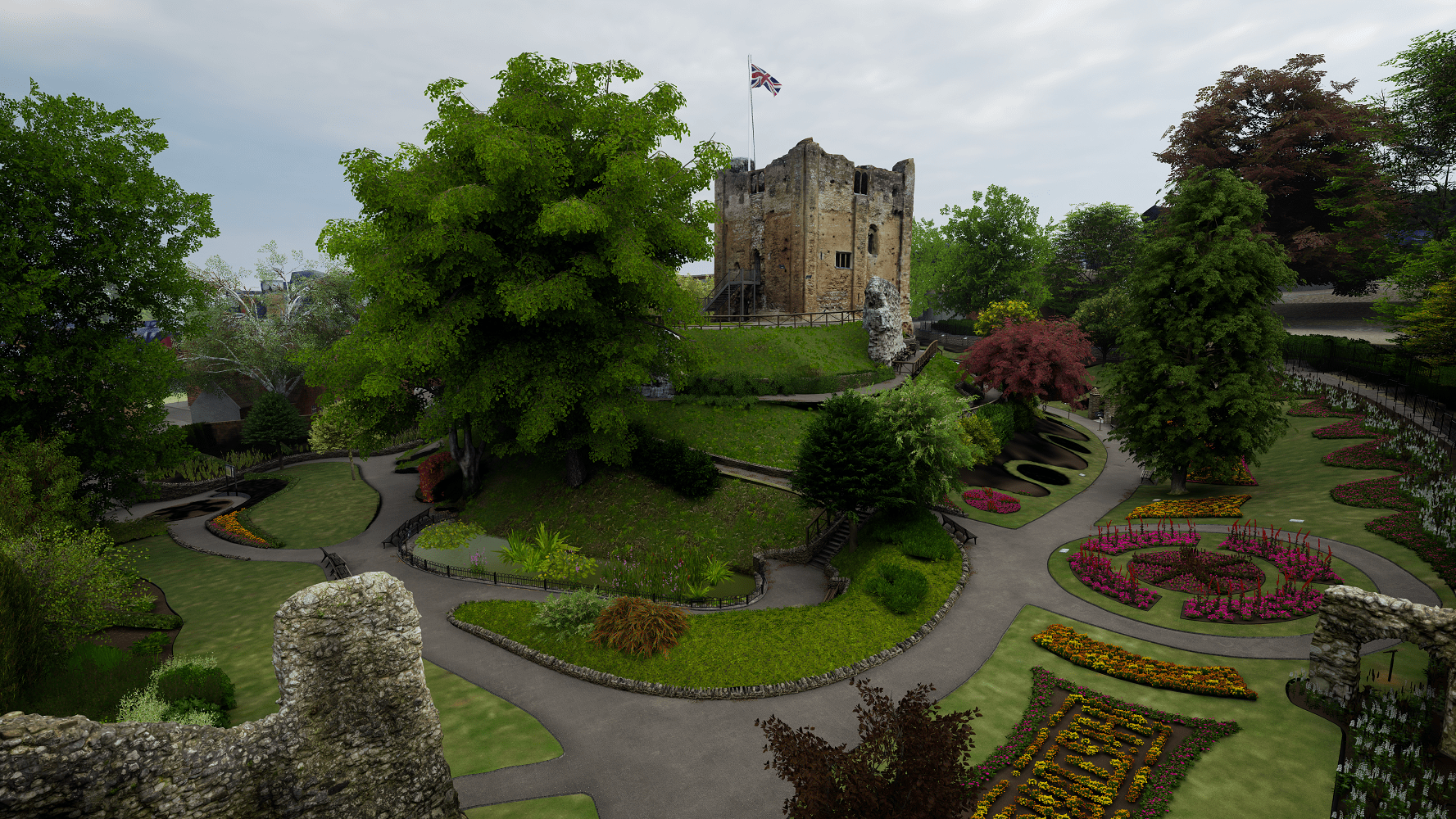 We set out with an uncompromising approach to the data capture. Inevitably, current hardware limitations prohibit us from getting anywhere near the source quality, however we were keen to see how far we could push the quality of the models whilst still being optimised for VR. This meant taking a large number of high-resolution photographs: over 16,000 photographs in total for the castle keep, other structural assets and environment props, as well as over 100 LiDAR scans across the entire site. 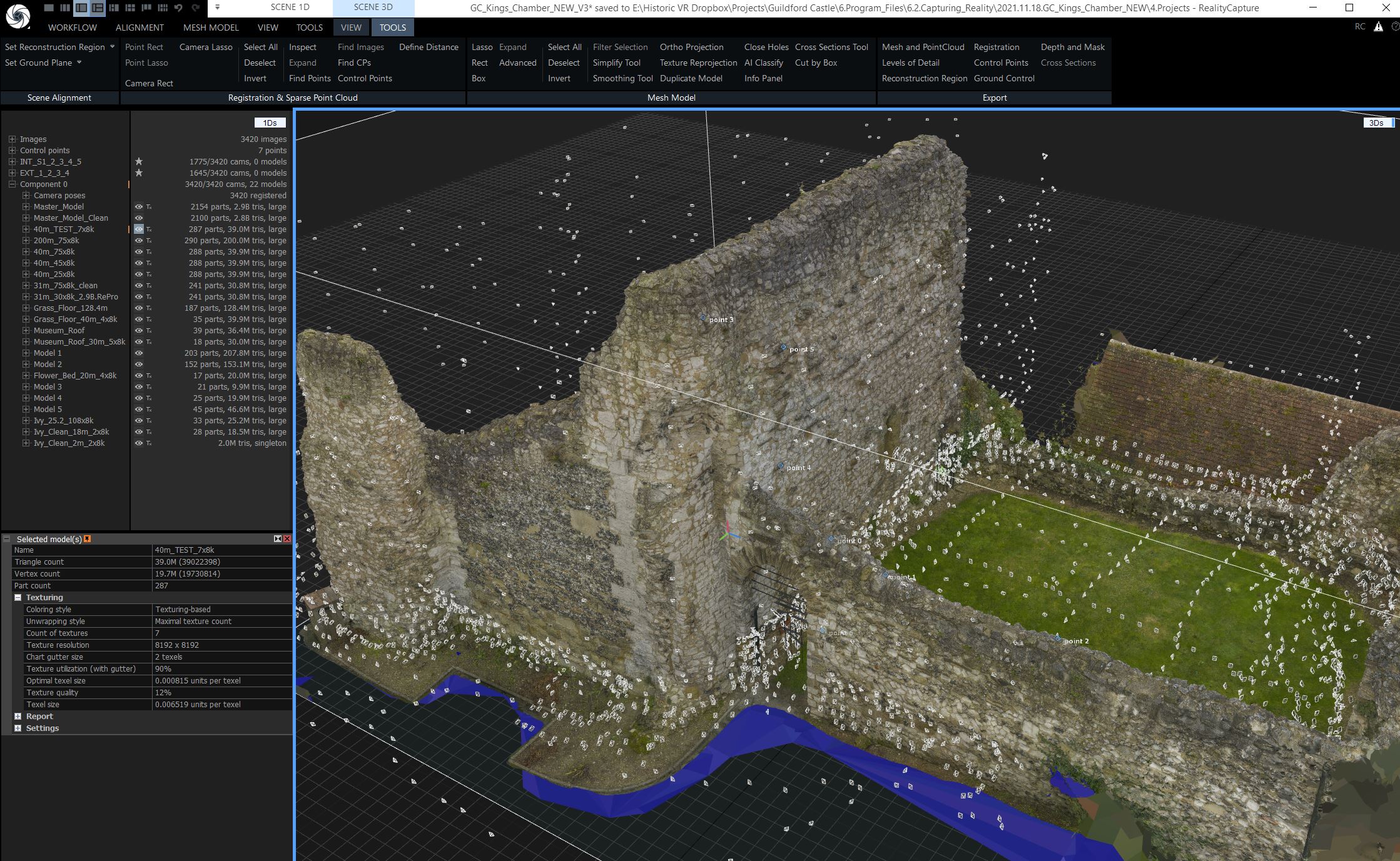 For the Keep (both inside and out), we relied on combining LiDAR with the photogrammetry data, having first registered the LiDAR scans in Faro’s SCENE software before processing combined data sets in RealityCapture. Being able to combine LiDAR and Photogrammetry is important as the models become bigger and more complex and so this is an essential feature for us.

We are specifically focused on using photogrammetry to create extremely realistic, highly optimised assets which can be placed in dynamic game engine environments using a full range of lighting scenarios. This brings with it many technical challenges and often makes the pipelines complex.

The foundation is high quality, clean data capture. Because we are ultimately looking for “delit” assets, we always seek to capture photogrammetry data in flat, even lighting conditions. When dealing with very large outdoor objects in variable lighting and under time constraints, data is rarely perfect, so there is often postprocessing work involved.

Creation of props and other environment assets

Photogrammetry is such an incredible tool for creating photorealistic assets that it creates a problem – it makes everything else look bad!

We had originally set out to follow more traditional game workflows for the props and other assets, but quickly found that the amount of time, effort and skill it takes to bring them to a comparable quality level as the main photogrammetry elements was infeasible.

We therefore used the same capture methods for all other elements, but using a more optimised workflow:

This process was used for the creation of all the garden props. 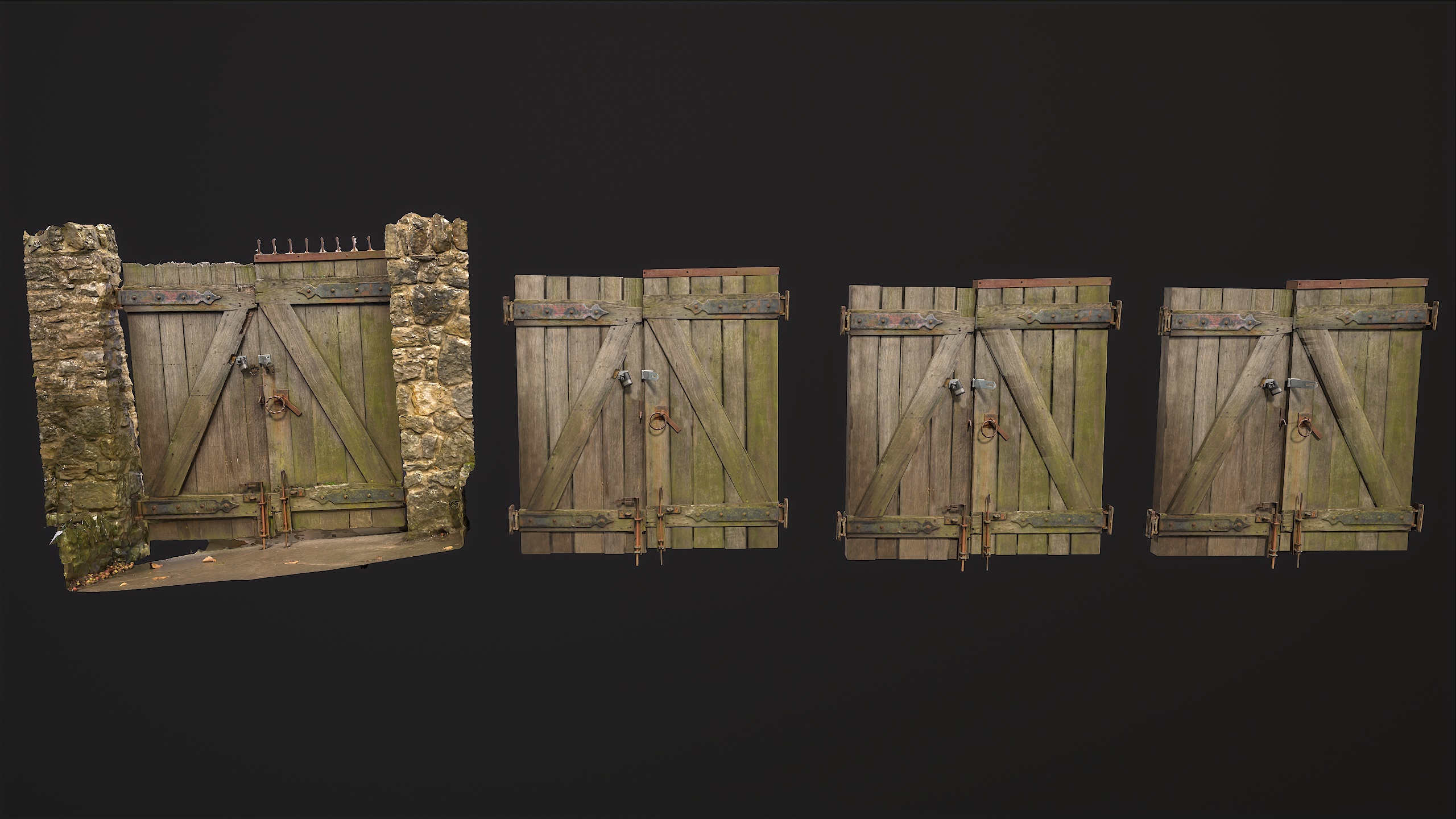 One of the greatest challenges of the project was recreating the foliage in the modern-day gardens, which are very densely planted and renowned for their elaborate flower displays.

As with the props and other assets, we had to reach a quality level which was in harmony with the photorealistic hard-surface assets, yet which was still within the stringent VR performance limits. 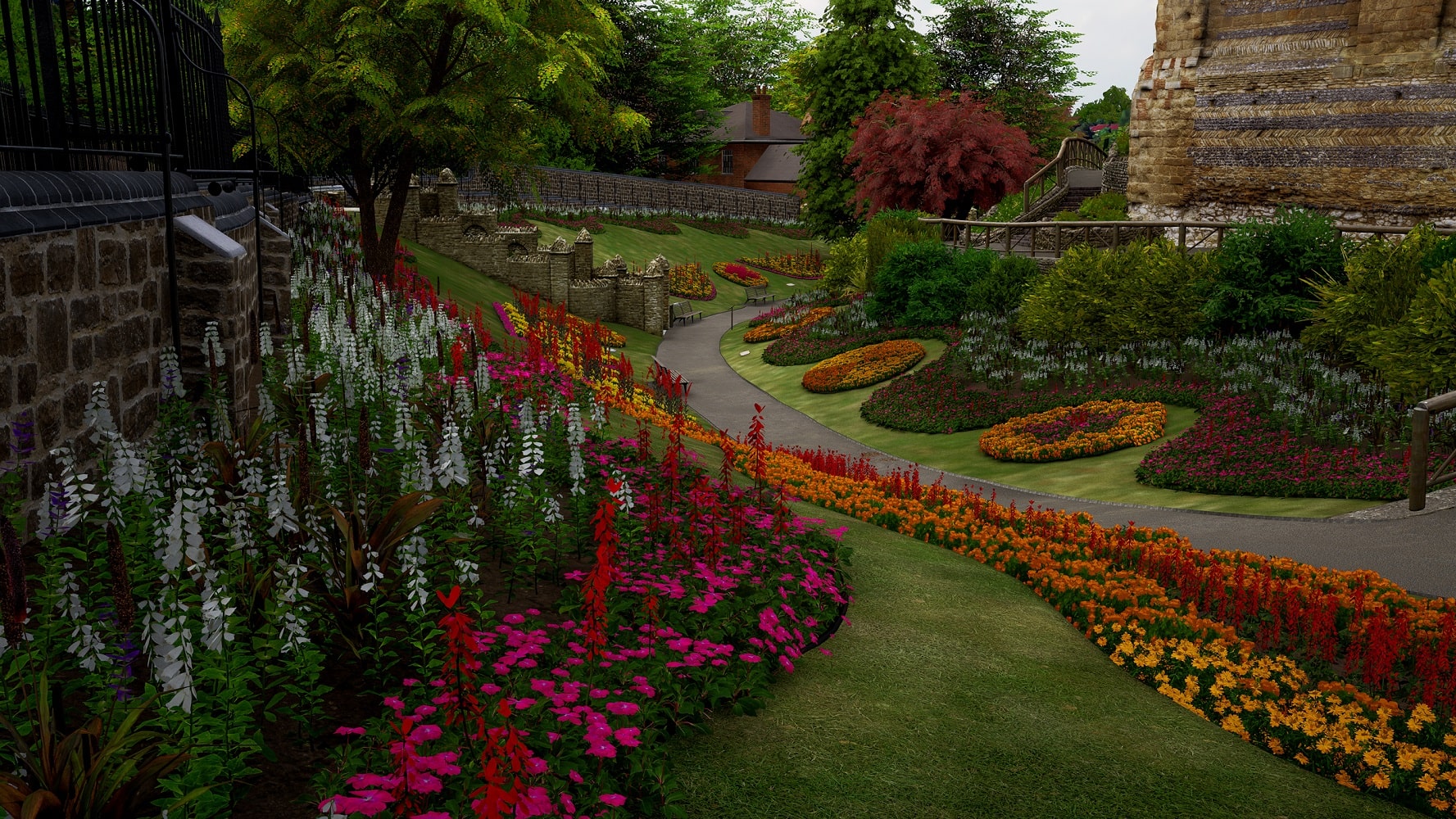 This turned into a monumental task: it was almost impossible to find high enough quality source data for most of the foliage, so we bit the bullet and captured the data for over 60 species ourselves, including over 20 unique flowers: 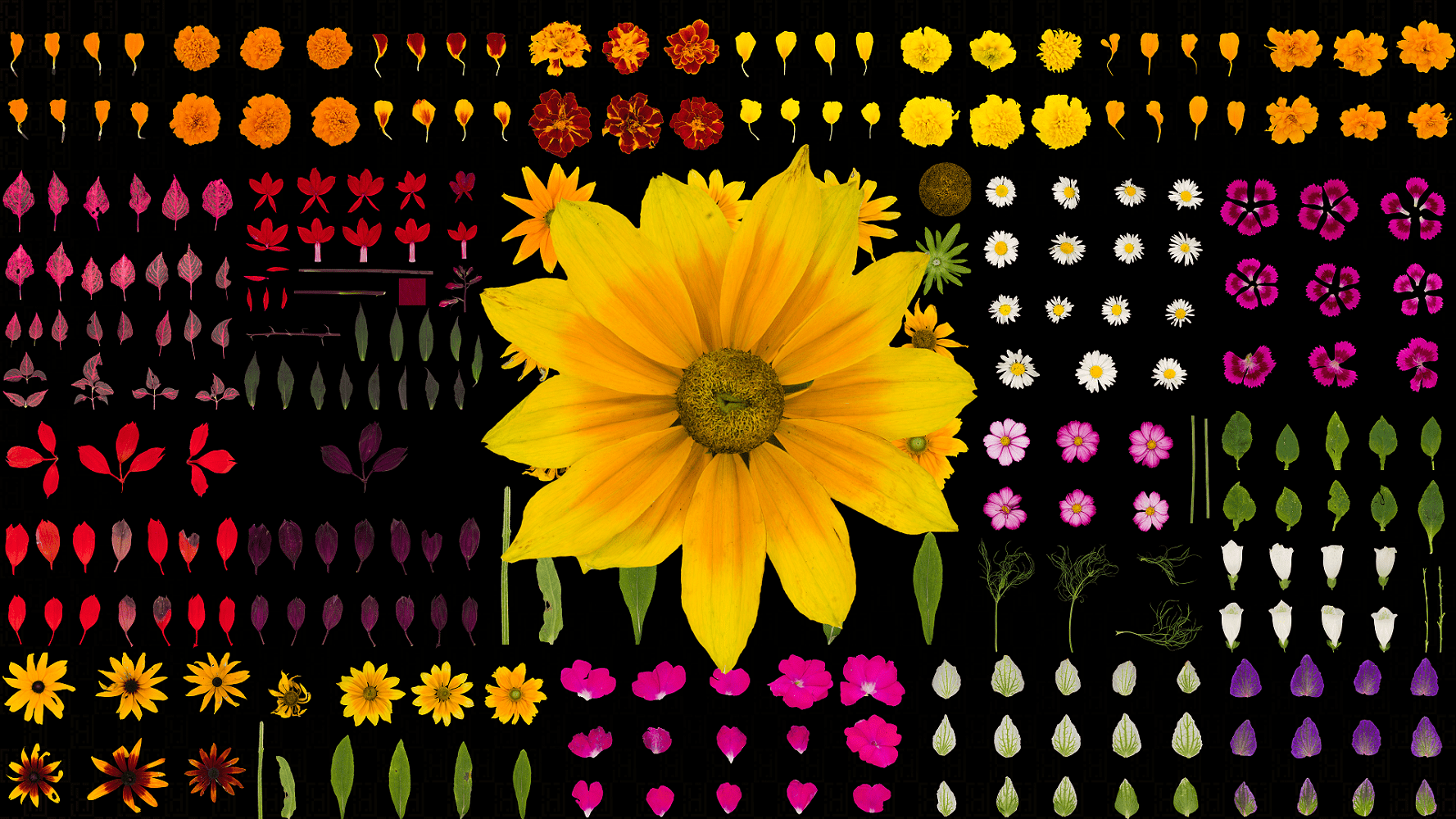 For many of the key trees, we used a combination of photogrammetry, LiDAR data and our own leaf source images to get as close as possible to the actual trees in the gardens:

Can you tell us more about the entire medieval town rebuilt in 3D?

The recreation of the medieval town started with the castle and palace complex, of which there is a physical model on the ground floor of the castle. When we were scanning this room, we realised how useful this could be and so took the opportunity to do a quickfire capture (using a spare Sony compact camera we had to hand). As we progressed the creation of the historic level, we amended this model based on updated archaeological reports and advice from our historian, however as a first basis, it proved extremely useful.

To ensure that our 3D models conformed to the real world, we used the LiDAR data of the surviving structures to accurately map the palace complex, including the Castle Arch built in 1256 (which still stands perfectly intact today) and a number of original outer wall sections.

The landscape was created by using an airborne LiDAR data with elements resculpted to fit the medieval period based on historical research (for example moving the course of the river and removing modern urban features).

The creation of the wider town was a huge task, with all the architectural elements – churches, town houses, mills, bridges – modelled from scratch based on archaeological reports and other historical sources. Whilst we could have taken many shortcuts and ended up with a very similar looking environment, we were keen to be as historically accurate as possible, so our users can be confident that what they experience is a faithful representation of the past, in parallel to the realism of the modern level.

How did you manage to recreate 12th century interior and furniture?

To walk in the keep today, or any other castle or medieval building in England, you will see only plain, unadorned stonework. This gives the completely opposite picture of how these places would have originally looked: medieval interiors were rich, intricate and extremely colourful. This was therefore one of the most enjoyable parts of the project and demonstrates the central idea of the experience: to see a radically different past appear before your eyes.

As with the recreation of the medieval town, this involved meticulous research. We took inspiration from English Heritage’s excellent real-life restoration of Dover Castle’s great tower of the same period, though were also careful to independently research each and every element.

Inspiration was also taken from period manuscripts, for example the Canterbury and Eadwine Psalters: 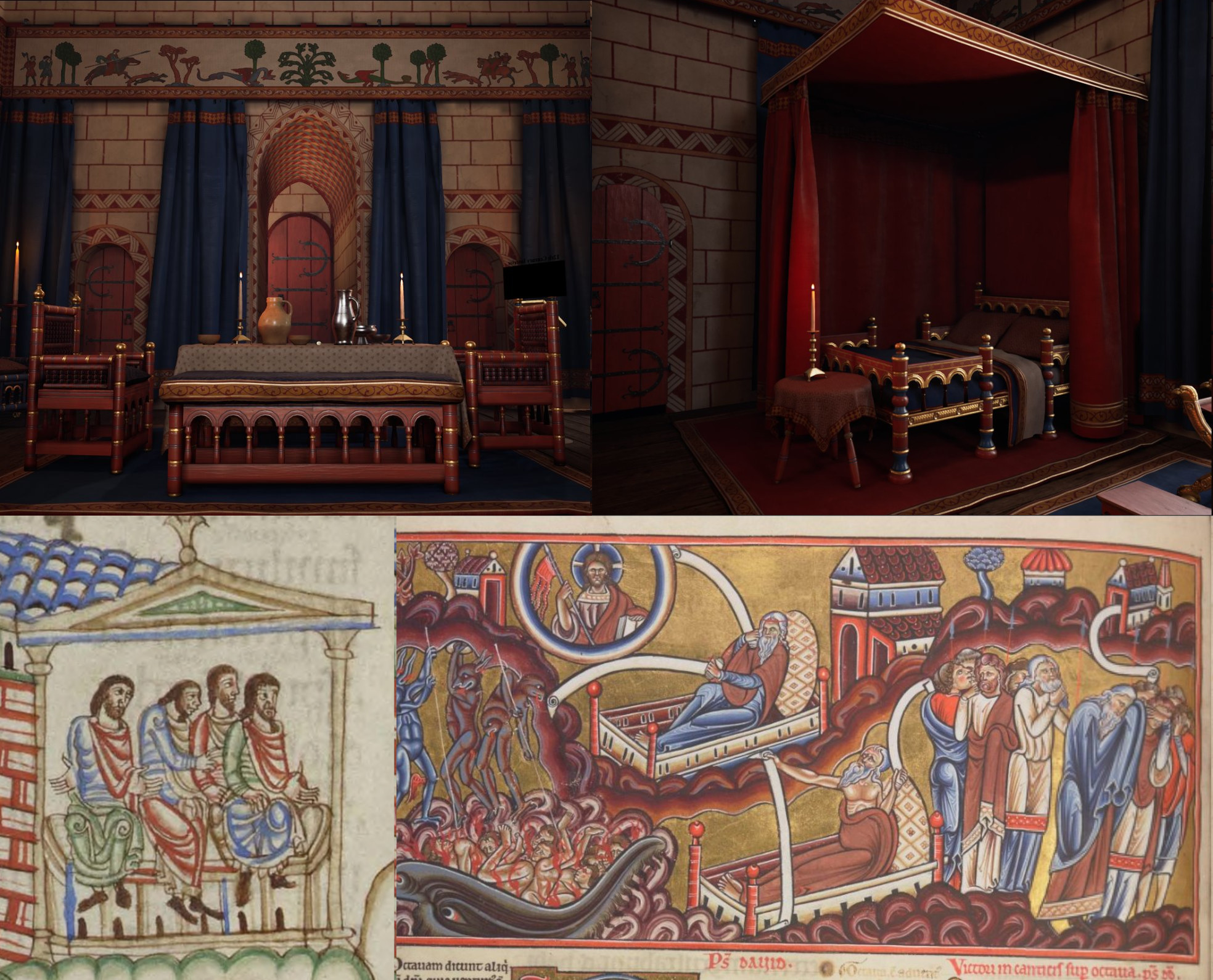 What are your future plans for the project? Are you planning on adding more VR interactions?

Our goal with this first project was to get the basics right by developing all of the environment art workflows, historical reconstructions and basic functionality. Following on from the successful completion of Guildford Castle VR, we’re currently looking to build on this core idea and to tackle much larger-scale sites where we are now confident that we can deliver even higher quality and more optimised environments for a broader range of headsets.

We certainly do intend to add more VR interactions, and this has been a major internal development focus since the Steam launch. In subsequent launches we plan to extend the richness of the passive narrative elements, but also to add new, active VR interactions which further engage users. A big priority is to add multilanguage functionality to bring the full historical experience to our global, non-English speaking users. 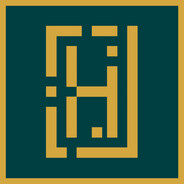 Historic VR is a real-time VR studio, with a main focus on history, heritage and traditional visual arts.